For this shot I had to test new  features of Pulldownit 2.7, specially  transition animation-dynamics capabilities. I needed and animated model  made of diferent pieces and break it upon collision, Pdi wood shatter works very nicely so I decided to try with a cart, besides I had modeled a horse sometime ago so it was perfect for attaching the cart to it.

The horse animation was made using a quadruped animation by layering techniques for the run-cycle instead the pose to pose or straight through techniques. You can find an amazing tutorial on how to animate a horse loop in this way here:

The hair of the horse was created with the Hair and Fur modifier in 3ds Max. The render mode of the hair was “geometry”, in order to get the depth of field of the Vray Camera rendered fine. The animation was made using the live mode dynamics.

Modeling and animating the cart

To build the cart I used some vintage photos as reference. The model is made of diferent pieces and single planks in order to not having issues when shattering it, the fence was built in the same way. The cart was rigged in two parts; one attached to the horse and another one more “free”, so I can introduce some noise in the animation when the cart is running fast over the irregular terrain. I used a couple of dummy objects attached to the geometry to drive the motion of the car straight toward the fence and secundary motion with the terrain slopes, the front and rear wheels where grouped  separately to make them spin around  its axis. I used some vray dirt in the material diffuse so that we can have a stronger ambient oclussion look. Vray ambient oclussion was checked too.

I needed different parts of the cart to break different, I mean, wheels should break different than the deck of the cart for example, so first thing I did was separate the parts of the cart in different layers, chassis, front wheels, rear wheels, seats, and  so on..then I started to shatter geometry per layer, making sure the active layer was the same of  the current shatter operation,  cart deck and footrest were shattered  using wood style the rest of  the cart was shattered using uniform style in a few fragments, 8 or so. Pdi 2.7 kept the animation of  the parts after shattering, that worked perfect. 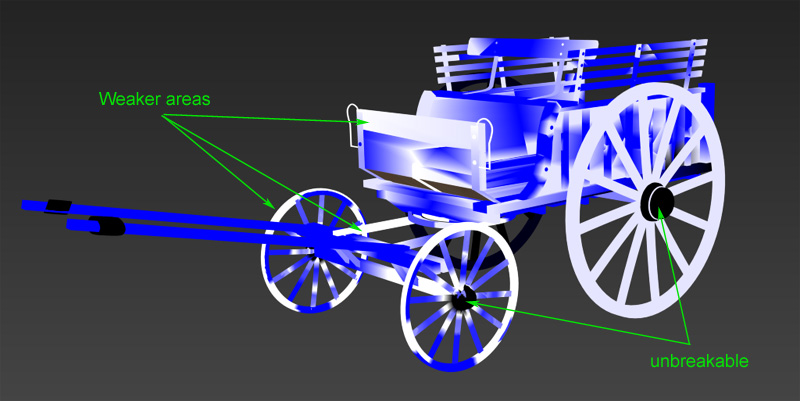 Setting the cart  in dynamics

I created a fracture body per layer,  in this way I could control the fracture of each part independently, as the cart is animated I set each fracture body as static and activation at frame in order to force them following  the animation until colliding with the fence, I reduced clusterize to 0.0 and set local propagation far all pieces. Finally I used PDI advanced fractures to prevent some parts to break at all, the axis of the wheels, and most part of the deck and one of the rear wheels doenst break because of this.

Breaking the cart in dynamics

Despite the near 800 fragments involved in the simulation and the complexity of having 8 diferent fracture bodies in dynamics, Pulldownit computes the cart destruction very fast.  However at my first tries the cart started  to break  too early, far before reaching the fence; I found out that the issue was caused because the cart was colliding with the terrain when moving and also different parts with each  other,  using new parameter “unbreakable until frame” was the key to solve it, just setting this parameter at a frame near to the fence solved the issue. Both the cart and the fence should get broken so I shattered  the fence as wood splinters and created a new fracture body for  it, however I set the fence as fully unbreakable using the new parameter in v2.7 to concentrate in the cart fracture first, it was as easy as disabling this parameter for making the fence breaking aswell once I was happy with the look of the cart destruction, that is another interesting use of this

For fine tuning of fracture and adjunsting the strenght of impact I tweaked hardness and damping parameters of each  piece interactively, for doing it I hid all layers except the one I was computing, Pulldownit seems to get along very well with layers. When I was happy with  the way each piece was fracturing I simply unhid all layers to bake the final result.

I think I got a believable breaking of the cart, Pulldownit 2.7 behave stable and fast, transition animation-dynamics worked nicely and  new parameter “unbreakable until frame” was a must to get the pieces breaking at the right moment, using layers was key to can handle each piece separately